What is the future of the Catholic parishes in Schiller Park ? 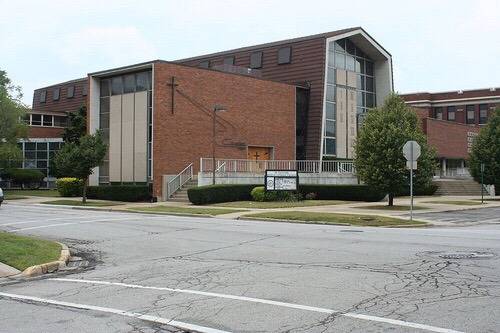 A radical overhaul in the nation’s third-largest Roman Catholic archdiocese could shutter many of the Chicago church’s houses of worship by 2030 as it reckons with decaying buildings and an expected shortage of priests, was further outlined in a letter from Cardinal Cupich which was read from the pulpit  at all masses in the Archdiocese on Sunday, January 22, 2017, including at St. Beatrice and St. Maria Gorietti in Schiller Park.   Link to Cardinal Cupich letter :

https://www.archchicago.org/documents/70111/70558/1.21.17_RMC+letter+to+parishioners_English.pdf/19094599-c006-4e1f-b8fe-0f3971bc7f4c
Chicago Archbishop Blase Cupich has told  priests and advisers in meetings over the last year that the shortage — an estimated 240 priests available in 2030 for the archdiocese’s 351 parishes — could necessitate closings and consolidations. The archdiocese governs parishes in Cook and Lake counties.

Based primarily on those projections and on future capital needs, the priests who attended the meetings say a large number of churches could close over the next 14 years. Several of those priests who attended the sessions with the archbishop have shared details about the reorganization process,  some requesting anonymity because of the sensitive nature of the discussion and because they didn’t have permission to speak on behalf of the archdiocese.
The reorganization process is kicking into high gear this Spring when auxiliary bishops begin meeting with parish leaders and staff in their regions to discuss solutions.

Such a massive parish reorganization would be larger than — and play out much differently from — Cardinal Joseph Bernardin’s decision in 1990 to close and merge more than 40 parishes, which along with school closings and a 10 percent cutback in administrative costs was aimed at saving $13 million annually.

No cost-saving target has been announced for this plan, but Chief Operating Officer Betsy Bohlen says the initiative is less about economics and more about fortifying the church’s mission.
The financial impact of this effort will be avoiding having to spend capital repair dollars that are unaffordable, it should be noted that the archdiocese has just launched a review to gauge those deferred costs. But that’s not the most significant reason (for the reorganization) at all.

In a message to parishioners that appeared in the past in Catholic New World, the archdiocesan newspaper, and that Cupich has shared with priests and advisers in the last year,  the archbishop casts the parish reorganization as an opportunity for renewal.

“Demographics have shifted dramatically,” he wrote. “Some of our parish buildings are in disrepair. We have fewer priests to pastor our faith communities. The result is that we end up spreading our resources too thinly.
“I would be less than honest if I did not acknowledge that by the time this consultative process is complete, we will mourn together the loss of some parishes,” he added. “But that will not be the final word. By having the boldness to leave behind familiar ways of doing things, we can seize this season as one that is not simply of loss, but rather of renewal.”

“I would be less than honest if I did not acknowledge that by the time this consultative process is complete, we will mourn together the loss of some parishes,” he added. “But that will not be the final word. By having the boldness to leave behind familiar ways of doing things, we can seize this season as one that is not simply of loss, but rather of renewal.”

Priests who spoke to the Tribune said, based on the expected priest shortfall and future infrastructure needs, as many as 100 churches could close over the next 14 years.
Bohlen said that could be the case if leaders in the archdiocese decide to assign one pastor per parish. But it’s unlikely that such a generic formula would be applied universally, she said.
“Parishes are very vital homes for people,” she said. “It’s closely connected to their faith life, and we take that very seriously. If they are a strong presence in the community, we’re biased to keep the strong presences out there. I don’t know how it’s going to play out.”
Cupich did not speculate in the column how many parishes might close. But it’s the numbers behind Cupich’s reference to the shortage of priests that is guiding preliminary projections for how many parishes could close or merge, sources said.
By 2030, there will be an estimated 240 priests available to fill Chicago’s pulpits according to published projections.
Those priests could be assigned individually to parishes, or to multiple churches in any variety of configurations, which ultimately will affect how many parishes eventually shutter. The estimate of 240 priests available for parishes by 2030 is not a firm figure, because not all ordained priests serve as pastors. Some work as canon lawyers, professors or administrators. And some simply aren’t ready to serve as pastors right after ordination, some publications note
At the present rate, about 180 priests are expected to retire by 2030, replaced by roughly 10 ordinations a year, according to archdiocesan information.
Since religious orders, which sometimes help fill pulpits, are facing the same shortages, the archdiocese may not be able to rely on them to fill the gap.
No one wants to be the pastor of two or three parishes if they can help it, they would be ineffective.

In the Schiller Park area, representatives from five parishes — St.Beatrice,  St. Maria Gorietti, Our Lady Mother of the Church,  Divine Savior (Norridge), and St. Gertrude (Franklin Park) — will meet beginning in March, 2017 to  discuss options and deliver recommendations to Cupich.

This working group is intended to solve the question of what to do with consolidation. Conversations in these meetings are centered on the question, “How can we form parishes that are going to respond to future needs with future resources that we’re going to have?”

Parish leaders also are to discuss the ministries that set their communities apart, which should lead to more discussions about making sure those ministries continued even if parishes closed.   This kind of collaboration is exactly how clergy and church officials hope the process will unfold in the working group.

While about a quarter of the 351 parishes in the archdiocese now receive financial aid, the archdiocese will weigh three additional factors when assessing the sustainability of parishes: capital needs, pastor availability and mission vitality.
Mission vitality will be based on people in the pews and less tangible, more pastoral metrics such as whether the community supports each other in prayer and worship, engages the millennial generation and brings newcomers to the church, fulfilling the church’s and Pope Francis’ call to evangelize. Efforts also will be made to avoid creating church deserts — neighborhoods with no accessible Catholic parish. Shifting the decisions to auxiliary bishops who oversee each region will help ensure that, reflecting Cupich and the pope’s mutual inclination to decentralize power.
Cupich also has emphasized to advisers, including the Archdiocesan Pastoral Council, that the process will take an egalitarian approach and no parish will be left out. Affluent parishes bursting at the seams will feel the pinch too, he has said.

Priests are saying the process will be nothing like the closings in 1990, when priests found out suddenly that their doors would be shut by the end of the year. One priest suffered a heart attack after delivering the news to his congregation on Sunday morning.

Back then, archbishops of other major cities frowned on Bernardin’s decision, saying closing parishes just wasn’t done. This time, priests say, Chicago is late in acting. Priests and parishioners in Boston and New York have already suffered painful parish closings in the past decade.

Some are saying of the 5 parishes in this working group only 2 will survive.   We are all facing a lot more questions than answers at this time.

With Norridge School District 80 interested in the Divine Savior property, the future of Divine Savior may be doomed, with the serving parish for Norridge, Chicago, and north Schiller Park going to Our Lady Mother of the Church, with the balance of the area including Schiller Par, and Franklin Park, going to one of the three remaining parishes in the working group.

Obviously, there is some template emanating from the Chicago Archdiocese with the way the 5 parish working group was designated;  leading one to conclude that the Archdiocese has already made some as yet undisclosed decisions impacting all of us who are parishioners in one of the parishes.

My closing thoughts:  I think this is a great opportunity for all people and for the archdiocese. We have to recognize there is going to be pain but try not to be afraid, try to trust. We are trained by American society to distrust things; we are trained to be afraid. Here is a place where you make a Christian choice — am I going to trust and hope or am I going to distrust and be afraid?

The second thing is this is opening up opportunities for everybody to have a hand in how this gets played out, even if you are not sitting at the tables that figure out what the new configurations of parishes will be. People will be able to step up and take important roles in helping to make decisions and carrying out actions and carrying out ministries.
You can focus on the loss or you can focus on the growth that will come.

3 Responses to What is the future of the Catholic parishes in Schiller Park ?