Illinoisans are struggling under the highest property tax burdens in the country.

Many of the reasons for those high taxes are known ­– too many local governments,  and rising pension costs.
What taxpayers don’t always recognize that local school districts have billions in debt, which drives up property taxes even further. 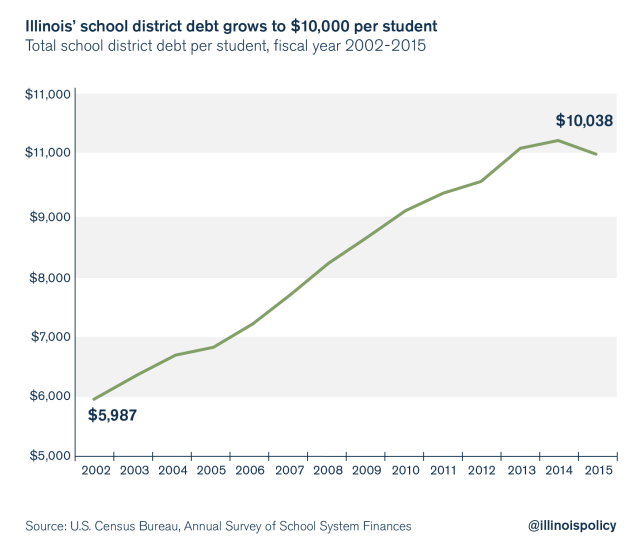 That’s an increase of over 67 percent since 2002, when debt equaled $12.3 billion. School debt grew at nearly double the rate of inflation over the 2002-2015 period.
Illinoisans have had to shoulder this debt growth through higher property tax bills.
Not all these school districts are issuing debt to accommodate masses of new students.

Student enrollment across the state has remained essentially flat over the past decade and a half, according to data from the U.S. Census Bureau.

Current debt approval processes have made it too easy for districts to spend beyond their means to upgrade facilities and fund daily operations.
The school debt approval process has many flaws. Referendums to approve debt do not provide essential information to voters. And these referendums occur on elections known for low voter turnout.

These flaws must be addressed in order to rein in school spending.

According to U.S. Census data, Illinois’ school district debt has risen dramatically over the past decade and a half.
Average debt per student was just $6,000 in 2002. By 2015, it had grown to more than $10,000 per student, a 68 percent increase ­– again, double the rate of inflation.

School districts issue debt to build new schools, fund daily operations, much more
Some of the largest debt issuances are to build new schools or update existing ones. For example, Hall HSD 502, in Spring Valley, took out $32 million in bonds to build a new high school in 2013.
Others have issued debt to access cash for daily operations. In 2008, Aurora East USD 131 took out $32 million with a promise to “cover operational costs and balance the budget by 2010.”
That new debt ended up costing local taxpayers. Aurora residents with homes valued at $100,000 ended up paying an extra $117 in property taxes each year.
Debt is necessary for major projects, and most school district debt issuances to build a new school or improve existing facilities are authorized through local referendums, meaning voters have to approve these measures.
Low voter turnout, vague referendum wording make debt approval easy to manipulate
Nearly 40 percent of school district debt or tax referendums in Illinois were placed on the ballots of local elections between 2006 and 2015.
Local elections are known for low turnout. The statewide April 7, 2015 local elections – for municipal mayors, village presidents, councilmen, aldermen and many other important local positions – saw roughly 81 percent of registered voters stay home, for example.

Low voter turnout makes it easier for special interest groups to dominate elections.
These referendums only require a simple majority vote to pass. The referendum Hall HSD 502 pushed for a new school passed by mere three votes – 1,717 to 1,714 – compared to their population of over 9,500.
In addition, local taxpayers sometimes know little about what they’re voting for because the language used in referendums can be vague. Usually only the amount of the original bond amount is cited – not the total cost, which would include interest payments and issuance costs too.
The description of why the bond is being issued is often vague as well. For example, Ford Heights SD 469 issued a referendum for an $11 million bond with the cryptic description of “for the purpose of paying claims.”
Illinois shouldn’t allow proponents of additional spending and debt to take advantage of low voter turnout in local elections, especially when many districts already have debt several times higher than the state average.
New debt is too important and costly an issue for such a limited number of taxpayers to authorize, especially when they are often not provided with enough information to make a fully informed decision.

Some districts borrow more than others across the State of Illinois.
According to Freedom of Information Act data from the Illinois State Board of Education, the district with the highest debt per student is Hall HSD 502, in Spring Valley, with $95,666 per student – almost 10 times the state average.
The district’s debt is the result of building a new $32 million, 134,000-square-foot campus for the area’s 371 students to replace the district’s 100-year-old high school building.
In addition, the Hall High School board of education approved another $1 million in bonds earlier this year. This additional debt will raise the property taxes of a $100,000 home by another $120.
Ford Heights SD 169 also makes the list of the districts with the highest debt per student. The district has over $20 million in debt for its 387 students. That’s $51,000 of debt per student. Ford Heights also has the highest property taxes in Cook County.
Ford Heights has a history of fiscal mismanagement, which has resulted in a debate over district consolidation and legislative action to do just that.

Debt limits are established by Illinois, but that does not hamper school districts in borrowing over the limits by using a combination of referendums and special legislation.
School districts are limited in how much debt they can accumulate. Their limits are calculated as a percentage of the equalized assessed value (basically, the property amount used to calculate local property taxes) in the district – 6.9 percent in elementary school and high school districts and 13.8 percent in full K-12 districts.
Across the state, 72 districts have exceeded their allowed debt limit. Collectively, they owe nearly $1 billion more than the school code originally allows them.Some school districts have used referendums to go into debt over the allowed limit. Others, such as Oswego CUSD 308, use special legislative measures in addition to a referendum to take out debt that exceeds their limit.
Legislation passed in 2007 allowed CUSD 308 to issue up to $450 million in bonds. The district now has almost $370 million in debt, or $21,600 per student. That’s $137 million over its original limit. This legislation allowed other districts to increase their debt by various amounts as well.
In all, nearly 5 percent of the state’s total school debt has been issued above prescribed limits.
Improving school debt transparency and accountability is absolutely necessary to protect the interests of the taxpayers.
The current rules that govern school district debt do not provide enough limitations, transparency or taxpayer involvement.
School districts should be required to pay back debt within 20 years instead of the 25 or even 30 years allowed now. Spreading debt out across more than 20 years impacts multiple generations and artificially hides the true cost of borrowing from taxpayers.
In addition, districts that exceed their debt limit should be restricted from issuing additional debt until they fall below their original limit.
Debt transparency should be improved by providing more information to taxpayers before they vote to authorize a bond.
Referendum language should include a detailed description of the project for which debt is being issued.
In addition, the total debt service proposed in a referendum should include all costs associated with the debt – the principal, interest and debt issuance costs. An estimate of the average annual property tax increase needed to pay the total debt service of the bond should be provided as well
Those requirements would give local taxpayers a far better idea a proposed bond’s full impact on their wallets.
Lawmakers such as state Rep. Jeanne Ives, R-Wheaton, and state Rep. Lou Lang, D-Skokie, have recently introduced different bills that include the above reforms.
In addition, referendum rules should be changed so special interest groups cannot dominate votes as easily.
Large bond issuances should only be allowed on the ballot during general elections – when participation is higher and special interests cannot easily influence the vote.
And any referendums issuing new debt that exceed a district’s debt limit should require a three-fifths majority to pass instead of a simple majority of votes.
Debt is a necessary tool for schools to pay for major projects. But the mountain of debt school districts have managed to amass over the past decade and a half is neither necessary nor healthy.
Enacting the above reforms would be a good start to getting Illinois’ school district debt under control.
And it would help reduce the burden on Illinoisans paying the nation’s highest property taxes.