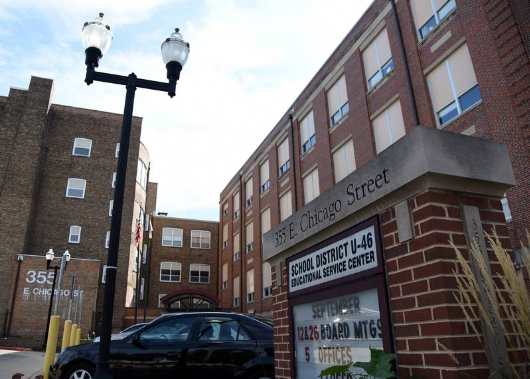 That’s almost five times the $390,383 spent on lawyers in Naperville Unit District 203, which had the second-highest legal bill among 92 suburban school districts.

In all, the school districts spent $11.5 million on lawyers last year.

“It does seem like we pay a lot of money for attorneys,” said U-46 board member Phil Costello. “When you have to spend those funds on legal things you are taking money out of the classroom.”

Almost $1.2 million of U-46’s 2015 legal expenses were part of the settlement of a lengthy legal battle between the district and five families that claimed schools had discriminated against minority students.

U-46 spent $46.37 per student on legal fees in 2015, according to a Daily Herald analysis of the 92 school districts’ annual statements. While that’s above the $31.97-per-student average among those districts, it’s not the highest amount.

That is at Antioch’s Grass Lake Elementary District 36, which spent $207.97 per student on legal fees. Grass Lake Superintendent Terry O’Brien said some of the previous year’s legal bills for teacher contract negotiations carried over to 2015, which drove up the total. By the end of last year, O’Brien said, the district had switched law firms and cut bills by more than half.

“They were too expensive,” he said, when asked why the district switched legal teams.
In all, 46 law firms combined to bill the school districts the $11.5 million total, but four firms received more than two-thirds of those funds.

Robbins Schwartz, based in Chicago, received $1.5 million from 21 school districts.

Scariano, Himes and Petrarca, based in Chicago, received $1.2 million from 26 school districts.

All four firms specialize in education law. In many instances, a school district paid multiple law firms during the course of the year.

“There may be things going on, joint agreements, where you’ve got the same firm as another district and so you have to hire outside counsel,” said Fox River Grove Elementary District 3 Superintendent Tim Mahaffy. “I don’t see that as a conflict or problem at all.”

Mahaffy’s district spent the least of any of the 92 school districts on legal bills in 2015, according to the analysis. He called the $3,894 paid to Robbins Schwartz a “valley” year because there weren’t any lawsuits being fought or employee contracts being negotiated.

“Things may look different this year,” he said.

Adam Andrzejewski, founder of the government finance watchdog group For The Good of Illinois and the transparency website OpenTheBooks.com, said the biggest problem for taxpayers is how school districts use law firms.

“Law firms aren’t often advising administrators or the school board what the law is. Instead, they are crafting opinions to support administrative positions and hold on to lucrative retainer agreements,” he said. “This is what we saw at College of DuPage.”

Last year, COD administrators and board members came under attack for questionable spending practices. The college’s attorneys lost a number of court cases against reporters who sued for access to public information, costing taxpayers more since the attorneys who gave faulty legal advice were still paid for their services.

“Absolutely, positively and unequivocally, integrity is the biggest virtue we have,” he said. “We don’t offer opinions that acquiesce to the administration’s preconceived results.”

Most school districts don’t have attorneys come to every board meeting. Gurnee Elementary District 56 Superintendent John Hutton said the $16,936 — or $8.03 per student — the district spent on legal work in 2015 was more than he would have liked, noting that school districts are often billed for the time it takes a lawyer to drive from the law office to the district.

“I always tell people we try to spend money like it’s our own and that’s why we don’t have a lawyer on retainer,” he said. “I’ve been in education for 40 years, so there aren’t too many thing that happen that I haven’t handled at least once.”